UN Climate Change News, 31 July 2018 – On August 1, the world will reach Earth Overshoot Day, the day when humanity will have used up nature’s renewable “budget” of resources for 2018. This according to the Global Footprint Network, an international research organization.

The carbon footprint, which represents the total amount of greenhouse gases produced to support human activities, plays a major role in this depletion as the fastest growing part of the humanity’s overall global ecological footprint.

Since a critical 60% of humanity’s ecological footprint comprises its carbon footprint, a significant increase in climate action is essential to end resource overuse and keep the average global temperature rise to well below 2 degrees Celsius and to as close as possible to 1.5 degrees Celsius below pre-industrial levels, which is the goal of the Paris Climate Change Agreement.

Achieving this goal is crucial to stave off the worst impacts of the climate change, which include more and more intense heatwaves, flooding, droughts and storms.

“We are using the Earth’s future resources to operate in the present and digging ourselves deeper into ecological debt,” said Global Footprint Network CEO Mathis Wackernagel.

The Global Footprint Network calculates that people are consuming nature’s resources 1.7 times faster than our planet’s ecosystems can regenerate them. 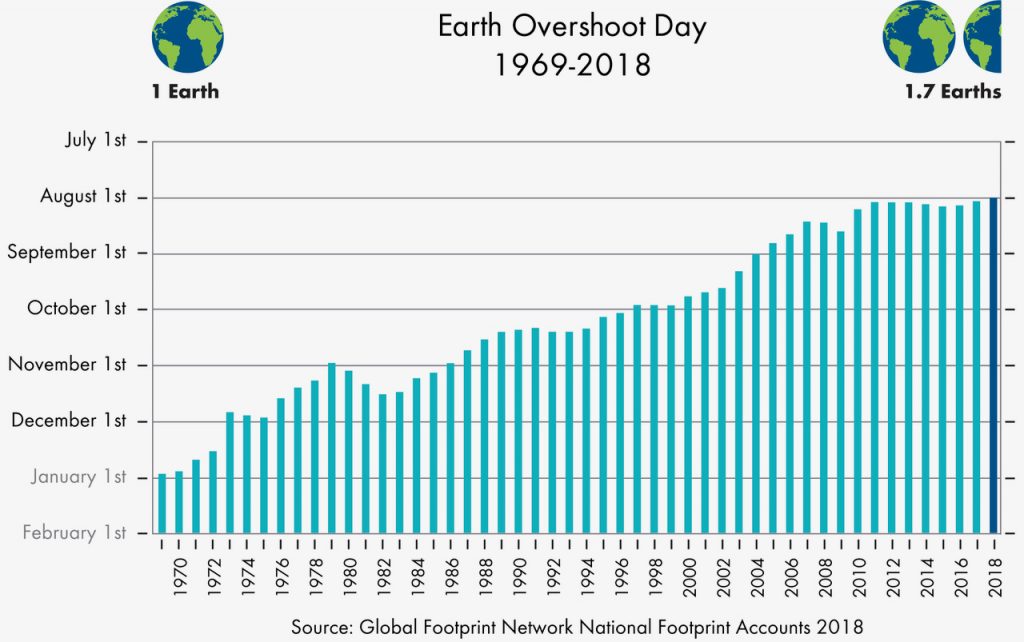 In addition to immediate climate impacts, the costs of ecological “overspending” include collapsing fisheries, fresh-water scarcity, soil erosion, forest die-out and biodiversity loss. These threats could lead to famine and force many people to migrate to cities or other countries.

Key Events around the World to Mark Earth Overshoot Day

Global Footprint Network and its partners will mark Earth Overshoot Day 2018 with several events around the world including interviews from leaders such as former UN Climate Chief Christiana Figueres and Erik Solheim, Executive Director of the UN Environment Programme.

“As we mark Earth Overshoot Day, today may seem no different from yesterday—you still have the same food in your refrigerator,” said Global Footprint Network CEO Mathis Wackernagel.

“But fires are raging in the Western United States. On the other side of the world, residents in Cape Town have had to slash water consumption in half since 2015. These are consequences of busting the ecological budget of our one and only planet,” he added.

Global Footprint Network has outlined four key areas with the most potential to correct ecological overshoot:

Although 86 percent of the world’s population lives in a country with an ecological deficit, the latest national Ecological Footprint data reveals some encouraging signs for moving back Earth Overshoot Day.

Global Footprint Network is inviting individuals to participate in Earth Overshoot Day by determining their own Personal Overshoot Day and Ecological Footprint at www.footprintcalculator.org and taking a “Step to #MoveTheDate” at www.overshootday.org/steps-to-movethedate .