In its special report published in May, the International Energy Agency draws the world's first comprehensive energy roadmap towards net zero emissions by 2050. It shows rapid boost of clean energy and reduction of fossil fuel can create millions of jobs and lift economic growth.

Building on this IEA's energy modelling tools and expertise this roadmap sets out more than 400 milestones of what needs to be done to decarbonize our global economy in just three decades. These include, from today, no new investment in fossil fuel supply projects nor in new unabated coal plants. To keep net zero in reach this guidance triggers questions about the Belgian decision to build new gas power plants replacing soon banned nuclear plants. 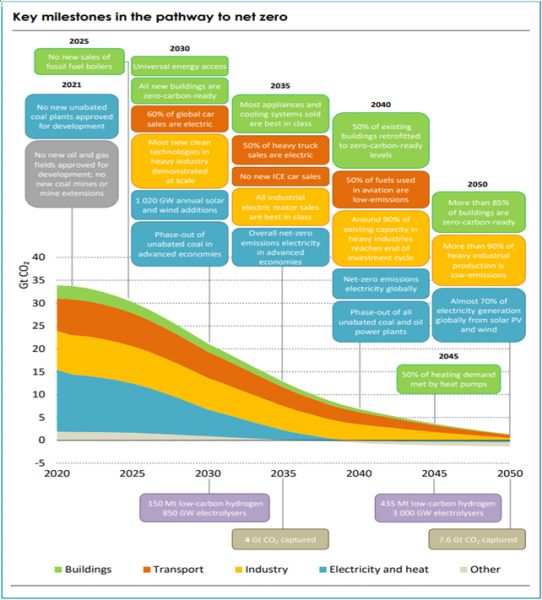 What are the major milestones?

In this pathway, global energy demand by 2050 is around 8% smaller than today but it serves an economy more than twice as big and a population with 2 billion more people. Instead of fossil fuels, the energy sector is based largely on renewable energy. Solar becomes the largest source, accounting for one-fifth of energy supplies. Solar PV capacity increase 20-fold between now and 2050, and wind power 11-fold.

Transition for and about people

Around 55% of the cumulative emissions reductions are linked to consumer choices, such as electric vehicles, retrofitting houses with efficient technologies or installing heat pumps. Behavioural changes such as replacing car trips by walking, cycling or public transport provide 4% of the emissions reduction.

Providing electricity to around 785 million people that have no access and clean cooking solutions to 2.6 billion people that lack those options is an integral part of the pathway. Governments need to ensure clean energy transitions are people-centred and inclusive.

In 2050, cars on the road worldwide run on electricity or fuel cells. Low‐emissions fuels are essential where energy needs cannot easily or economically be met by electricity. For example, aviation relies largely on biofuels and synthetic fuels, and ammonia is vital for shipping. In buildings, bans on new fossil fuel boilers need to start being introduced globally in 2025, driving up sales of electric heat pumps.

Emissions from industry, transport and buildings take longer to reduce

All the technologies needed to reach the 2030 targets already exist and the policies that can drive deployment are already proven. Reaching net-zero by 2050 will however require clean energy innovation, mainly for batteries, hydrogen electrolyzers, and direct air capture storage, mainly for heavy industries and long-distance transport.

Total annual clean energy investment adds an extra 0.4 percentage point a year to annual global GDP growth. The jump in private and government spending creates millions of jobs in clean energy, including energy efficiency, as well as in the engineering, manufacturing, and construction industries. 14 million jobs created by 2030 thanks to new activities and investment in clean energy and 5 million lost in fossil fuels resources.

Making net‐zero emissions a reality hinges on a singular, unwavering focus from all governments – working together with one another, and with businesses, investors and citizens. The net-zero pathway relies on unprecedented international cooperation among governments, especially on innovation and investment.

The full report is available for free on the IEA’s website along with an online interactive that highlights some of the key milestones in the pathway that must be achieved in the next three decades to reach net-zero emissions by 2050.