Electric Cars Are Better for the Planet – and Often Your Budget, Too

Electric vehicles are better for the climate than gas-powered cars, but many Americans are still reluctant to buy them. One reason: The larger upfront cost.

New data published Thursday shows that despite the higher sticker price, electric cars may actually save drivers money in the long-run.

To reach this conclusion, a team at the Massachusetts Institute of Technology calculated both the carbon dioxide emissions and full lifetime cost — including purchase price, maintenance and fuel — for nearly every new car model on the market.

They found electric cars were easily more climate friendly than gas-burning ones. Over a lifetime, they were often cheaper, too. 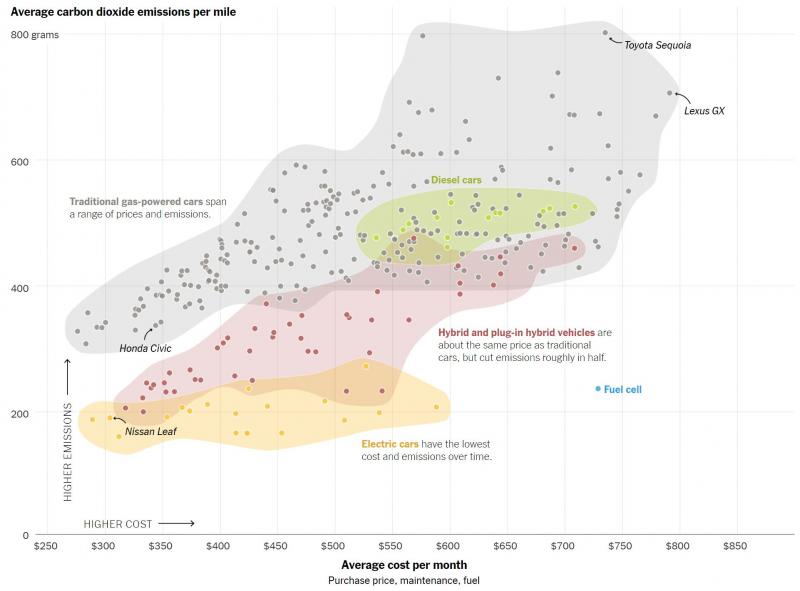 Source: carboncounter.com by the MIT Trancik Lab | Note: The chart shows data for new cars, SUVs and other models that retail for $55,000 or less. The most fuel efficient trim for each car is included and additional trim levels are shown for cars over $35,000 if they have a lower fuel economy rating than other trims shown (they are less efficient) by at least 4 miles per gallon.

Climate scientists say vehicle electrification is one of the best ways to reduce planet-warming greenhouse gas emissions. In the United States, the transportation sector is the largest source of emissions, most of which come from cars and trucks.

Jessika Trancik, an associate professor of energy studies at M.I.T. who led the research, said she hoped the data would “help people learn about how those upfront costs are spread over the lifetime of the car.”

For electric cars, lower maintenance costs and the lower costs of charging compared with gasoline prices tend to offset the higher upfront price over time. (Battery-electric engines have fewer moving parts that can break compared with gas-powered engines and they don’t require oil changes. Electric vehicles also use regenerative braking, which reduces wear and tear.)

The cars are greener over time, too, despite the more emissions-intensive battery manufacturing process. Dr. Trancik estimates that an electric vehicle’s production emissions would be offset in anywhere from six to 18 months, depending on how clean the energy grid is where the car is charging.

The new data showed hybrid cars, which run on a combination of fuel and battery power, and can sometimes be plugged in, had more mixed results for both emissions and costs. Some hybrids were cheaper and spewed less planet-warming carbon dioxide than regular cars, but others were in the same emissions and cost range as gas-only vehicles.

Traditional gas-burning cars were usually the least climate friendly option, though long-term costs and emissions spanned a wide range. Compact cars were usually cheaper and more efficient, while gas-powered SUVs and luxury sedans landed on the opposite end of the spectrum.

Dr. Trancik’s team released the data in an interactive online tool to help people quantify the true costs of their car-buying decisions — both for the planet and their budget. The new estimates update a study published in 2016 and add to a growing body of research underscoring the potential lifetime savings of electric cars.

Comparing individual cars can be useful — and sometimes surprising.

Source: carboncounter.com by the M.I.T. Trancik Lab | Note: For their calculations, the M.I.T. researchers assumed each car would last 15 years and drive an average of 13,000 miles per year. The most closely comparable drivetrain and trim levels are shown in each vehicle pairing in this chart.

Take the Tesla Model 3, the most popular electric car in the United States. The M.I.T. team estimated the lifetime cost of the most basic model as comparable to a Nissan Altima that sells for $11,000 less upfront. (That’s even though Tesla’s federal tax incentive for electric vehicles has ended.)

Toyota’s Hybrid RAV4 S.U.V. also ends up cheaper in the long run than a similar traditional RAV4, a national bestseller, despite a higher retail price.

The charts above use nationwide average prices for gasoline and electricity to estimate lifetime costs, but the results may shift depending on where potential buyers live. (The interactive tool allows users to input their local rates.)

Hawaii, Alaska and parts of New England have some of the highest average electricity costs, while parts of the Midwest, West and South tend to have lower rates. Gas prices are lower along the Gulf Coast and higher in California. But an analysis from the Union of Concerned Scientists still found that charging a vehicle was more cost effective than filling up at the pump across 50 major American cities. “We saw potential savings everywhere,” said David Reichmuth, a senior engineer for the group’s Clean Transportation Program.

Still, the upfront cost of an electric vehicle continues to be a barrier for many would-be owners.

The federal government offers a tax credit for some new electric vehicle purchases, but that does nothing to reduce the initial purchase price and does not apply to used cars. That means it disproportionately benefits wealthier Americans. Some states, like California, offer additional incentives. President-elect Joseph R. Biden Jr. has pledged to offer rebates that help consumers swap inefficient, old cars for cleaner new ones, and to create 500,000 more electric vehicle charging stations, too.

Chris Gearhart, director of the Center for Integrated Mobility Sciences at the National Renewable Energy Laboratory, said electric cars will become more price competitive in coming years as battery prices drop. At the same time, new technologies to reduce exhaust emissions are making traditional cars more expensive. “With that trajectory, you can imagine that even immediately at the purchase price level, certain smaller sedans could reach purchase price parity in the next couple of years,” Dr. Gearhart said.