Could 2020 mark a major turning point for the global clean energy transition – with hydrogen at its core? Is this the beginning of a new decade in which governments, industry and investors shift gears together and move more rapidly towards scaling up hydrogen-based solutions for cleaner transport, heating, and industry? On the third anniversary of the Hydrogen Council’s launch at Davos in January 2017, the stars seem to be aligning to make this happen.

According to new data from three global agencies, NASA, NOAA and the UK Met Office, the 10 years to 2019 were the warmest on record, and this comes after the IPCC’s warning of the expected impacts of 1.5°C of global warming. In the future, we may look back at this past decade as being the one that fully recognised the climate challenge - while the next decade, starting now, offers an opportunity to address it. So while these global organizations have been working to gather data, we – the hydrogen industry – have been working hard to identify solutions to help tackle the issue.

Today, we have the opportunity to tap into the enormous potential of hydrogen for a range of applications, from fuelling passenger cars and heavy-duty trucks to heating buildings and powering industry. It can help us decarbonize hard-to-abate sectors such as heavy transport, steel and aviation; and, most importantly, it generates zero emissions at the point of use, can be produced from renewables such as solar and wind, and provides a solution in instances of excess electricity production, as it allows for long-term energy storage. In fact, if we focus on scaling up in the next decade, hydrogen could meet 18% of the world’s final energy demands by 2050 and provide roughly 20% of the CO2 abatement required to limit global warming.

The cost of hydrogen will fall sharply and sooner than expected

Until now, the biggest challenge for hydrogen energy has been its price tag. The costs associated with hydrogen for everyday use has put it out of reach compared to other options, but this is about to change. A new report entitled Path to Hydrogen Competitiveness: A Cost Perspective, launched by the Hydrogen Council – a CEO-led coalition of now more than 80 companies working to bring the benefits of hydrogen to the world – shows that by massively scaling up hydrogen production, distribution, equipment and component manufacturing, the cost of hydrogen solutions is projected to decrease by up to 50% by 2030 in a wide range of applications, making hydrogen competitive with other low-carbon alternatives and, in some cases, even conventional options.

Significant cost reductions are expected across different hydrogen solutions. For more than 20 of them, such as long-distance and heavy-duty transportation, industrial heating, and heavy-industry feedstock, which together comprise roughly 15% of global energy consumption, the hydrogen route appears the decarbonization option of choice – a material opportunity. This cost trajectory can be attributed mainly to scale-up that positively impacts the three main cost drivers:

· A significant fall in the cost of producing low-carbon and renewable hydrogen.

· Lower distribution and refuelling costs thanks to higher load utilisation and scale effect on infrastructure utilisation.

· A dramatic drop in the cost of components for end-use equipment from scaling up of manufacturing.

The report debunks the myth that a hydrogen economy is unattainable and demonstrates that the possibility of a clean energy future in which hydrogen plays a major role may well be closer than we think. 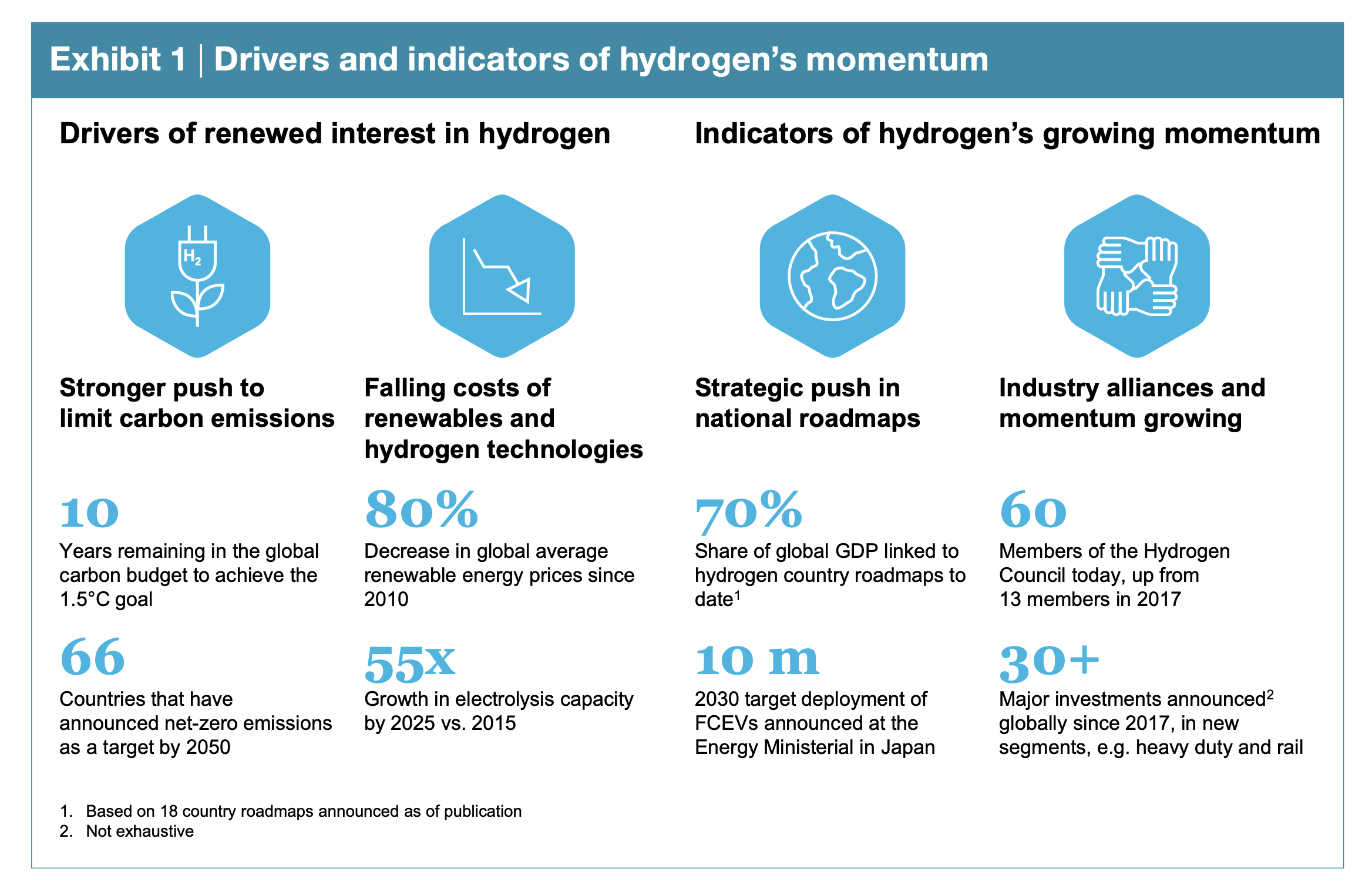 The conditions and timing are right Image: The Hydrogen Council - Path to Hydrogen Competitiveness report

Investing in hydrogen now for a clean-energy future

To deliver on this opportunity, policy-makers need to help create the right market conditions. Governments in key geographies will need to put in place supporting policies, and investment support of around $70 billion will be needed from various sources over the next decade in order to scale up and achieve hydrogen cost-competitiveness. While this figure is sizeable, it accounts for less than 5% of annual global spending on energy. For comparison, global yearly spending on energy amounts to $1.85 trillion, while subsidies provided to renewables in Germany totalled roughly $30 billion in 2019 alone.

The momentum in the hydrogen sector is strong. Deployments, strategies, alliances and technology developments are progressing in wider geographies and sectors. Still, some key high-potential projects are yet to take off. Similarly, while some measures and supporting financing tools are in place, many of them are lacking in terms of scope and impact to firmly bring the sector to scale. In the last year, the industry has been establishing partnerships with a clear commitment to scale up. Through the Hydrogen Council, we have – for example – partnered with the European Investment Bank to identify the right innovative financing schemes, hosted industry leaders and members of the investment community at an Investor Day at the G20 Summit in Japan, and brought investors onboard with a new Investor Group – all steps in defining and implementing how to accelerate major investment in large-scale commercialisation of hydrogen solutions across industries worldwide.

2020 could indeed mark the beginning of a new era for clean energy. If we step up investments in hydrogen technologies and succeed in developing the right policy framework to turn hydrogen into a major part of our global energy system, hydrogen can help us lower our emissions while significantly improving energy security and resilience. If we are to collectively reach our global climate goals and reap the economic and environmental benefits of hydrogen, now is the time to act.